Years ago I put some time into sticking some cool live wallpaper I found online on my phone, and I still use it. It's pretty neat and works great on Android phones. I also use ring tones that were made by taking parts from Mass Effect music tracks and editing and saving them as MP3 files. I figured it might be nice to share what I have to other folks that want to customize their phone to look pretty cool and themed with Mass Effect stuff. Also helpful when I switch to another phone to have this information handy.

The Live Wallpaper I used was actually originally made by nVidia and Bioware but it has this huge honking ugly logo on it - so I found one from someone that does away with the logo. You have to select female Shephard though as you set the background settings. I preferred the female Shephard anyways - the male Shephard was removed from this modified Live Wallpaper, which was fine by me. The pictures below are static but the wallpaper actually moves with Reapers falling to the planet. 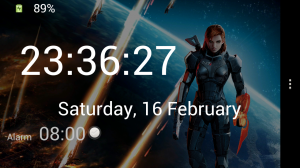 Original Live Wallpaper by nVidia and Bioware. (not available anymore)
Modded Live Wallpaper with female Shephard that I use.
Local copy on my own website of the modded live wallpaper above.

You can use the media player here to listen to the track - the arrow on the right allows you to download the MP3 file.

All the material above is copyrighted by the original copyright holders Bioware, Microsoft Game Studios, Electronic Arts, nVidia and others. No copyright infringment is intended - I only want to share this great stuff with other fans.